Set design for The Snow Maiden opera by Nikolai Rimsky-Korsakov is one of 2021 Golden Trezzini nominees in the “Best Implemented Set Design” category. 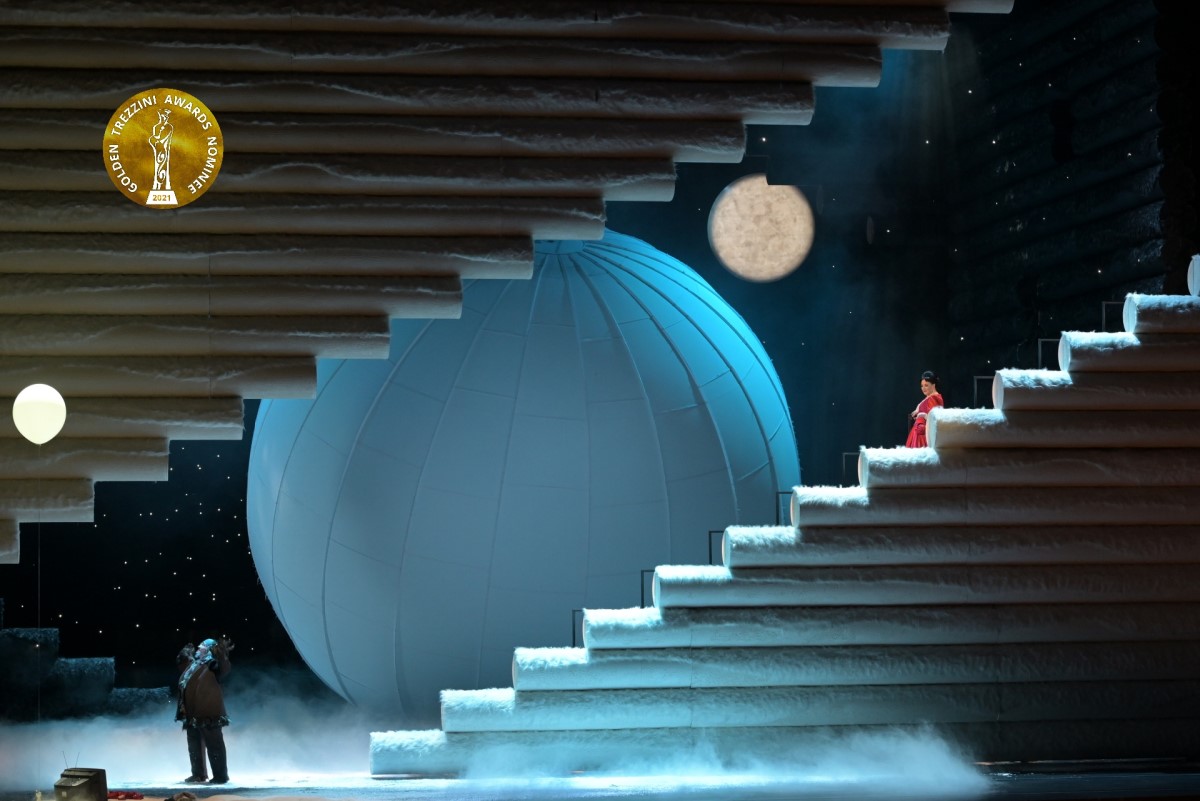 The Snow Maiden production nominated for the Golden Trezzini Awards for its set design, was shown for the first time on 4 September, 2020, at the Mariinsky II, St. Petersburg, Russia. Valery Gergiev contributed as Musical Director, the Stage Director is Anna Matison.

According to Alexander Orlov, the set designer, his work was inspired by the words from the aria by Bonny Spring, one of the opera's key characters: “Now in the very shadow, vast and chill, of woods that mourn, I bid the flowers spring up from the frozen sod.”

Alexander Orlov in 1974 graduated from the Leningrad State Institute of Theatre, Music and Cinematography (course taught by Edward Kochergin). From 1976 to 1980 he worked as a production designer at the Young Spectators’ Theatre in Riga. Between 1981 and 1986 and subsequently between 1990 and 1993 he was Principal Designer of the Youth Theatre on the Fontanka. In 2005 he launched a course at the Russian State Institute of Stage Arts (formerly the St Petersburg Academy of Theatre Arts). Since 1980 he has been a member of the Union of Artists. Has taken part in seasonal exhibitions of the Leningrad Organisation of the Union of Artists of Russia, the Results of the Season exhibition at the Union of Theatre Workers of Russia, All-Union and Republican exhibitions of the Union of Artists in Moscow and Kazan, the Baltic nations’ triennial exhibitions in Tallinn and Vilnius, the Prague Quadrennial in 1983 and a set design exhibition in Nový Sad. Diploma-recipient at the Prague Quadrennial (1983), recipient of St Petersburg’s most prestigious theatre prize the Golden Sofit (1998, 2001, 2002, 2004) and recipient of the State Prize of Russia (2000). Honoured Artist of Russia since 2005 and corresponding member of the Russian Academy of Arts since 2006.

The Golden Trezzini website users are more than welcome to vote for their preferred projects via Facebook, giving them a chance to win special Premio del Pubblico Award.

The Golden Trezzini Awards for Architecture and Design are named after Domenico Trezzini (1670—1734), Russian architect of Swiss origin, the first architect of St. Petersburg. The motto of the Awards is 'Architecture as Art'. The Domenico Trezzini gilded statuettes are awarded to the authors of architectural and designer projects that amount to works of art. The Honorary Chairman of the International Council for the Golden Trezzini Awards is Mikhail Piotrovsky, President of the World Club of St. Petersburgers and General Director of the State Hermitage.

Entries are open from March 15 till October 1 at https://www.goldtrezzini.ru/en/application2021/. Nominees from all over the world are invited. More than 80 projects from 25 countries have been already accepted. Participation is free of charge.