The Awards named after Domenico Trezzini, the first architect of St. Petersburg, has been in business for years, and along the way, an extensive prize system has been developed that embraces both fundamental and special awards. 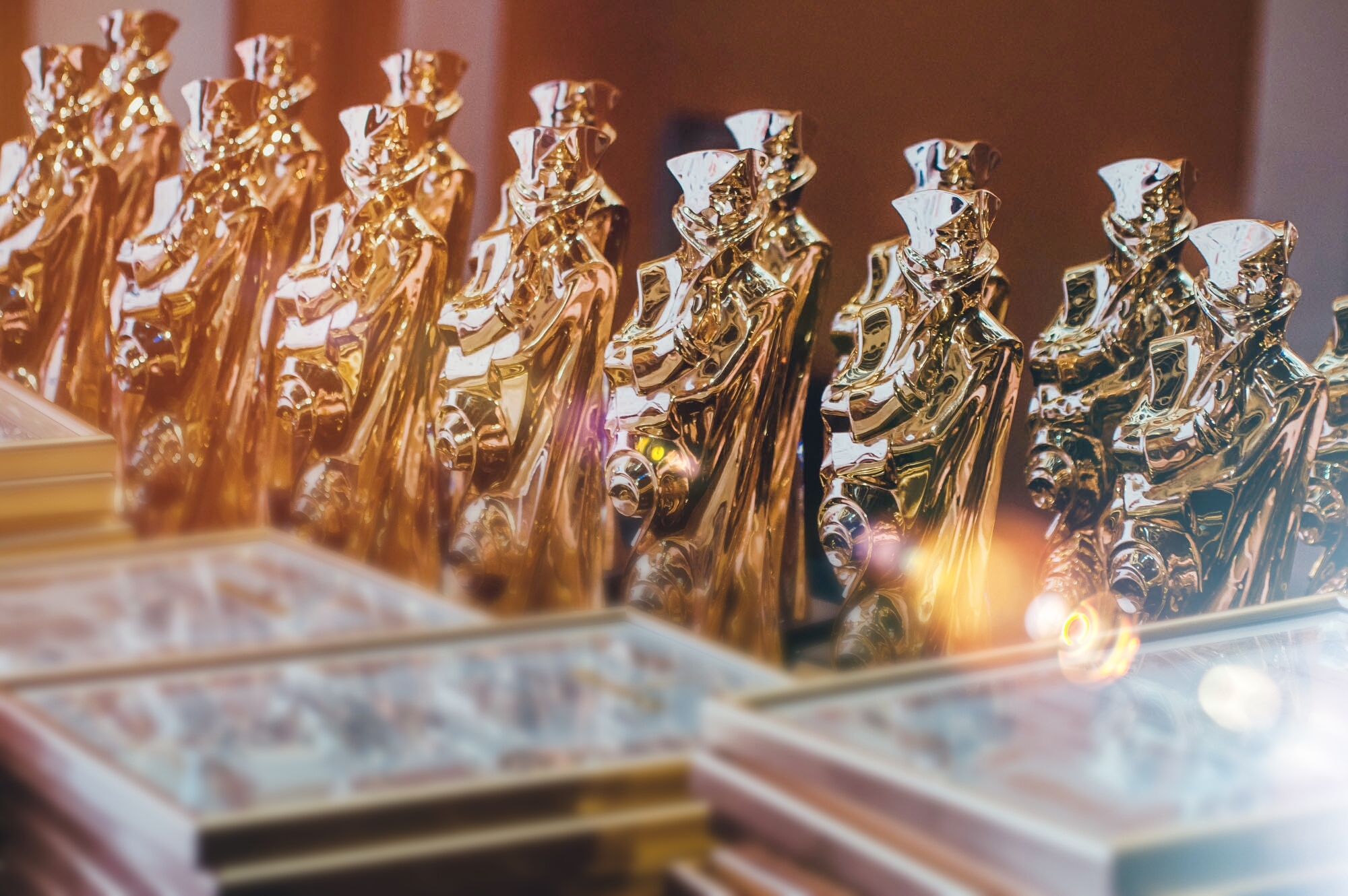 The awarding system of Golden Trezzini comprises figurines, prizes, medals, and diplomas. Welcome to the brief guidebook through the Golden Trezzini Awards prizes compiled for the notice of the participants, as well as connoisseurs and fans of phaleristics (the science which studies award items). 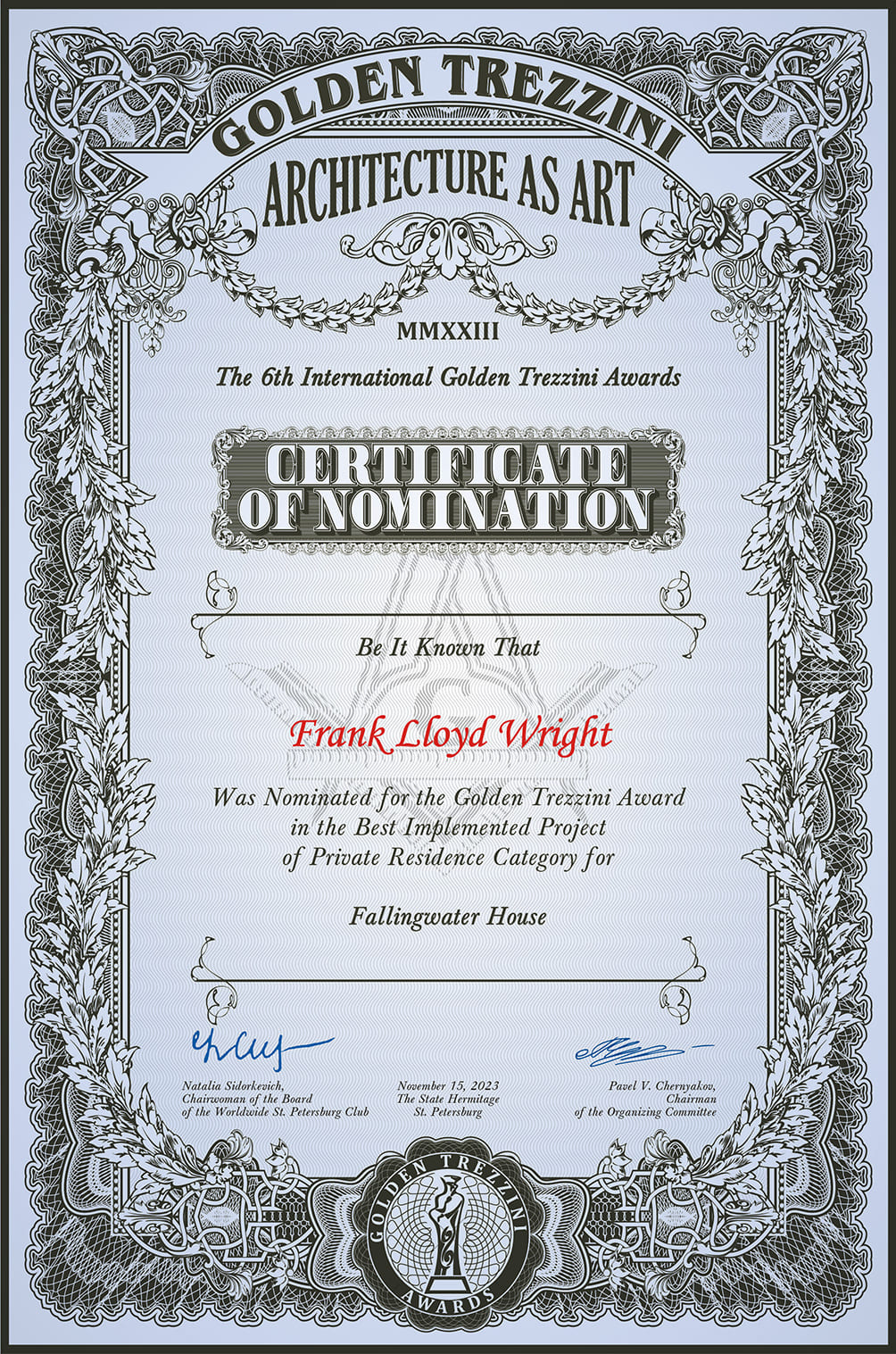 Following the application acceptance stage, applicants for every basic category who don’t make it as winners are sent electronic Nominee Certificates (pdf-filed ready for print) after the Awarding Ceremony on request.

Does it mean that such certificates are used to all and sundry? The bad (or the good) news have it that it is not so. Such certificates are not issued to applicants if their projects have been declined by the Organizing Committee at the application submission stage due to their incompliance with some of the Awards Regulations. For example, in 2022, 1123 applications from 74 countries of the world were submitted for participation, but only 879 of them received the status of nominees and were allowed to participate in the first stage of voting. 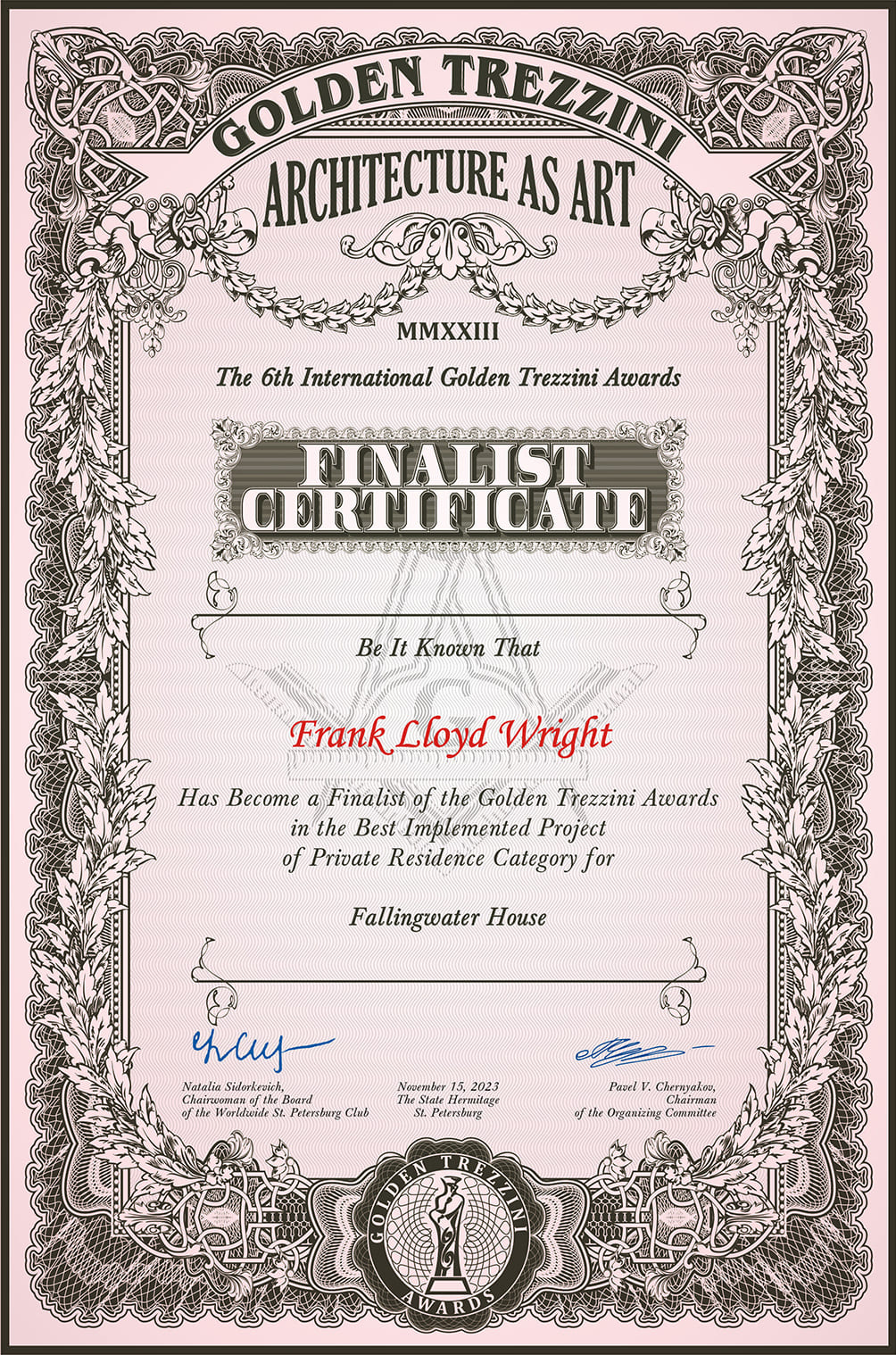 Following the results of the 1st voting stage, finalists in all the categories that don’t make it as winners (but for the category ‘Architectural or Restoration Project that Complies Best with the Spirit and Traditions of St. Petersburg’ get Finalist Certificates. These are sent electronically (pdf-filed ready for print) on request after the Awarding Ceremony. 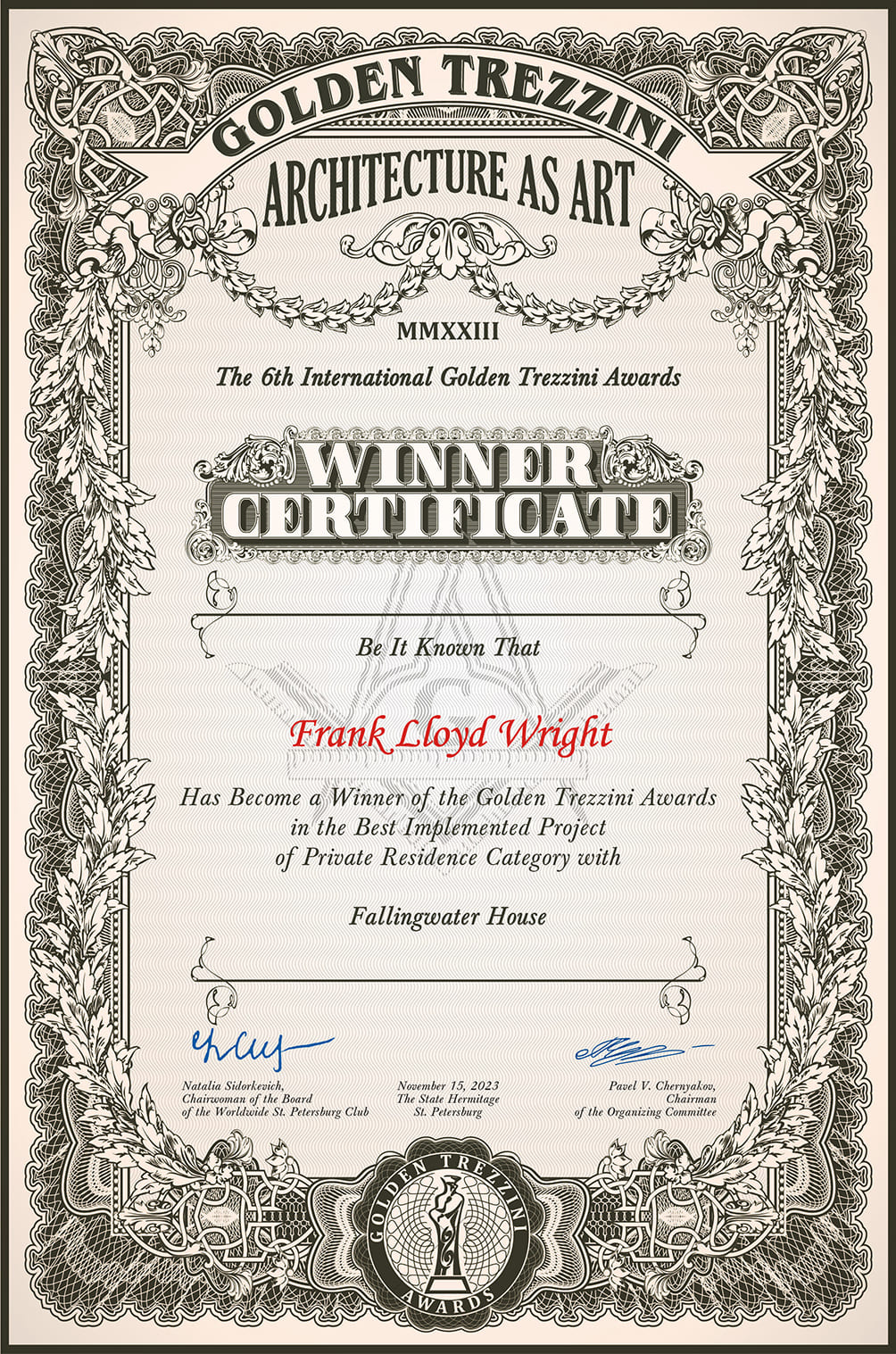 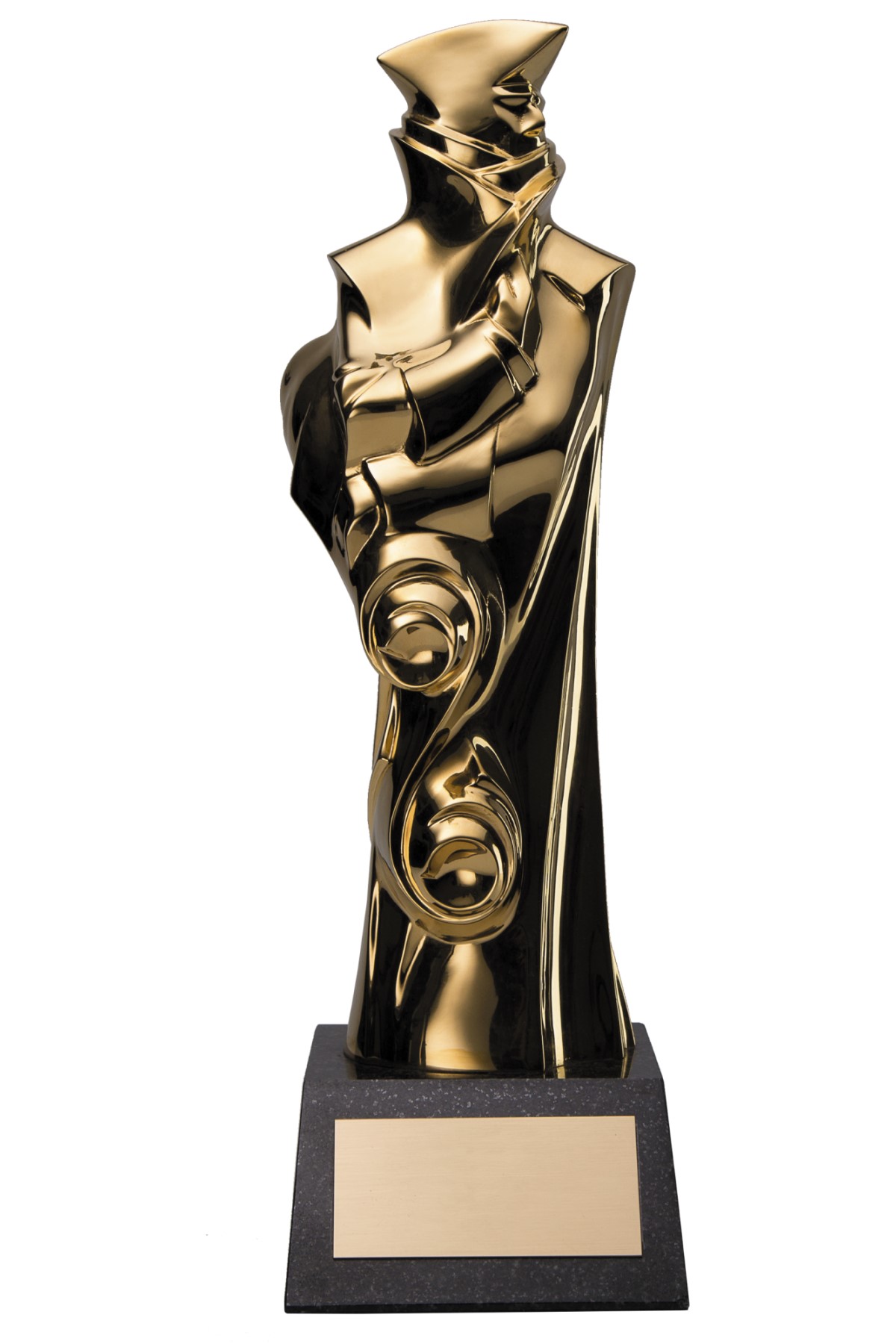 After the 2nd voting stage, winners in 18 major categories and the winner of the Premio del Pubblico (People's Choice Award) are awarded Golden Trezzini gilded figurines and Winner Certificates.

The winner in one of the major categories — Best Implemented Façade or Interior Project Using Ceramics gets the Ceramic Trezzini figurine and the Winner Certificate.

The winner in one of the major categories — Best Implemented Interior Design Project Using Works of Art gets the Golden Trezzini Compasses designed by sculptor Pavel Ignatiev and the Winner Certificate.

The winner in one of the special categories — Architectural or Restoration Project that Complies Best with the Spirit and Traditions of St. Petersburg gets the Genius Petropolis Medal named after Valentina Orlova (1946—2021), the 1st Chairwoman of the Board of the Worldwide St. Petersburg Club and the Winner Certificate. 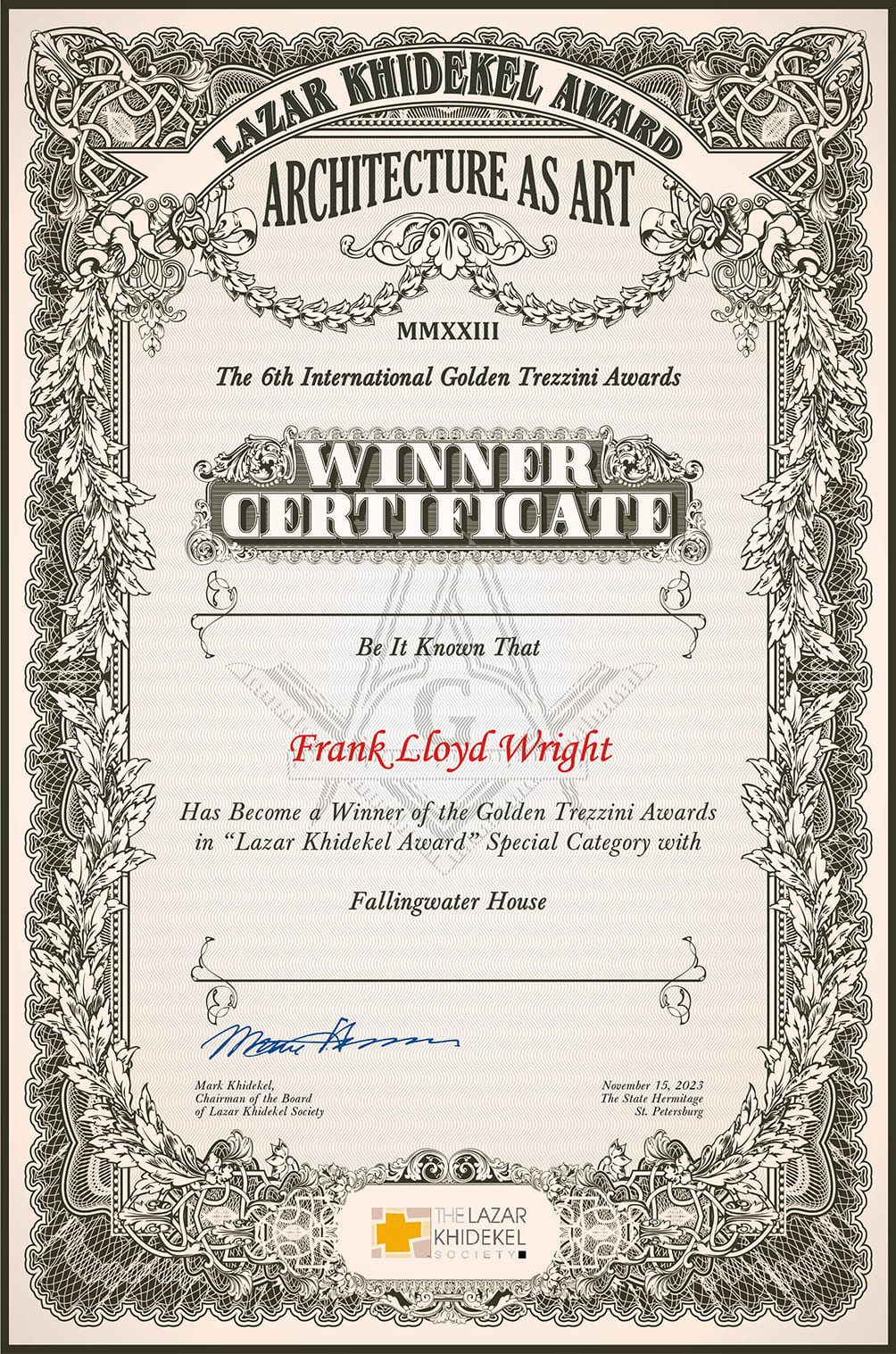 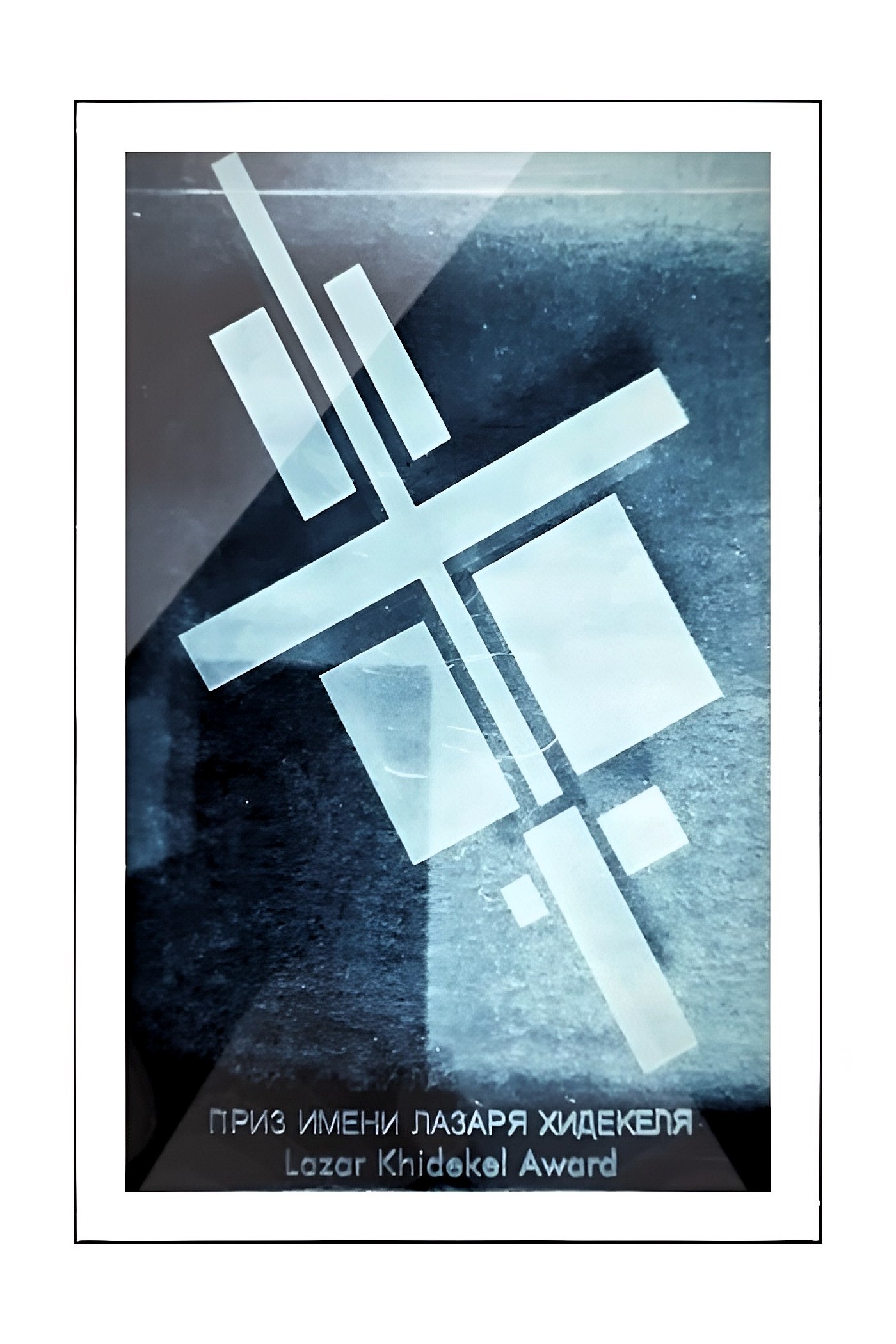 The winner in the special Lazar Khidekel Prize category, chosen from the applicants to fundamental categories gets the prize and the Winner Certificate.

According to the Awards Regulations, the Organizing Committee is entitled to choose winners in the special categories to be awarded Golden Trezzini gilded figurines and Winner Certificates.

The partners and sponsors of the Awards, are entitled to give out prizes to applicants and winners of the competition beyond this basic prize system.

Winners that cannot take part in the Awarding Ceremony, will be sent their prizes by post, whereas their certificates will be sent on request by e-mail (pdf-filed ready for print). 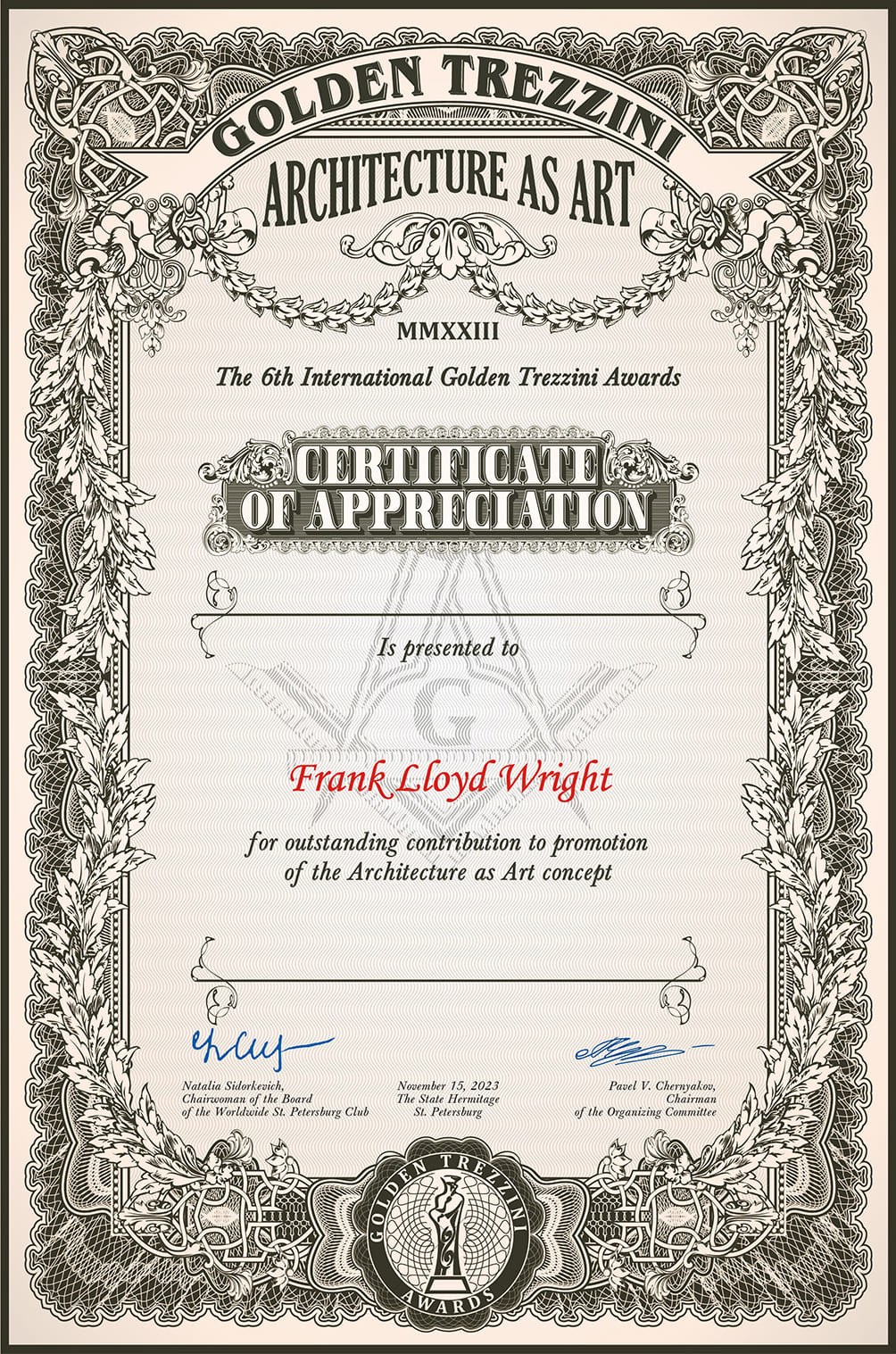 On extraordinary occasions, natural or legal bodies that have had some life-changing effect on the progress of the Awards, or made some outstanding contribution to promotion of the Architecture as Art concept get the Golden Trezzini figurine and the premium Certificate of Appreciation. Four participants have already received this prize. They were Roger M. Kull, who worked as Consul General of Switzerland in St. Petersburg from 2017 till 2020, the Embassy of Russia in Switzerland, Natalia Sidorkevich, the Chairwoman of the Board of the Worldwide St. Petersburg Club, and Mikhail Piotrovsky, the President of the Worldwide St. Petersburg Club, General Director of the State Hermitage. This is the only prize that is only awarded in case the awardee (or the awardee’s representative in case with a legal body) is personally attending the Awarding Ceremony. 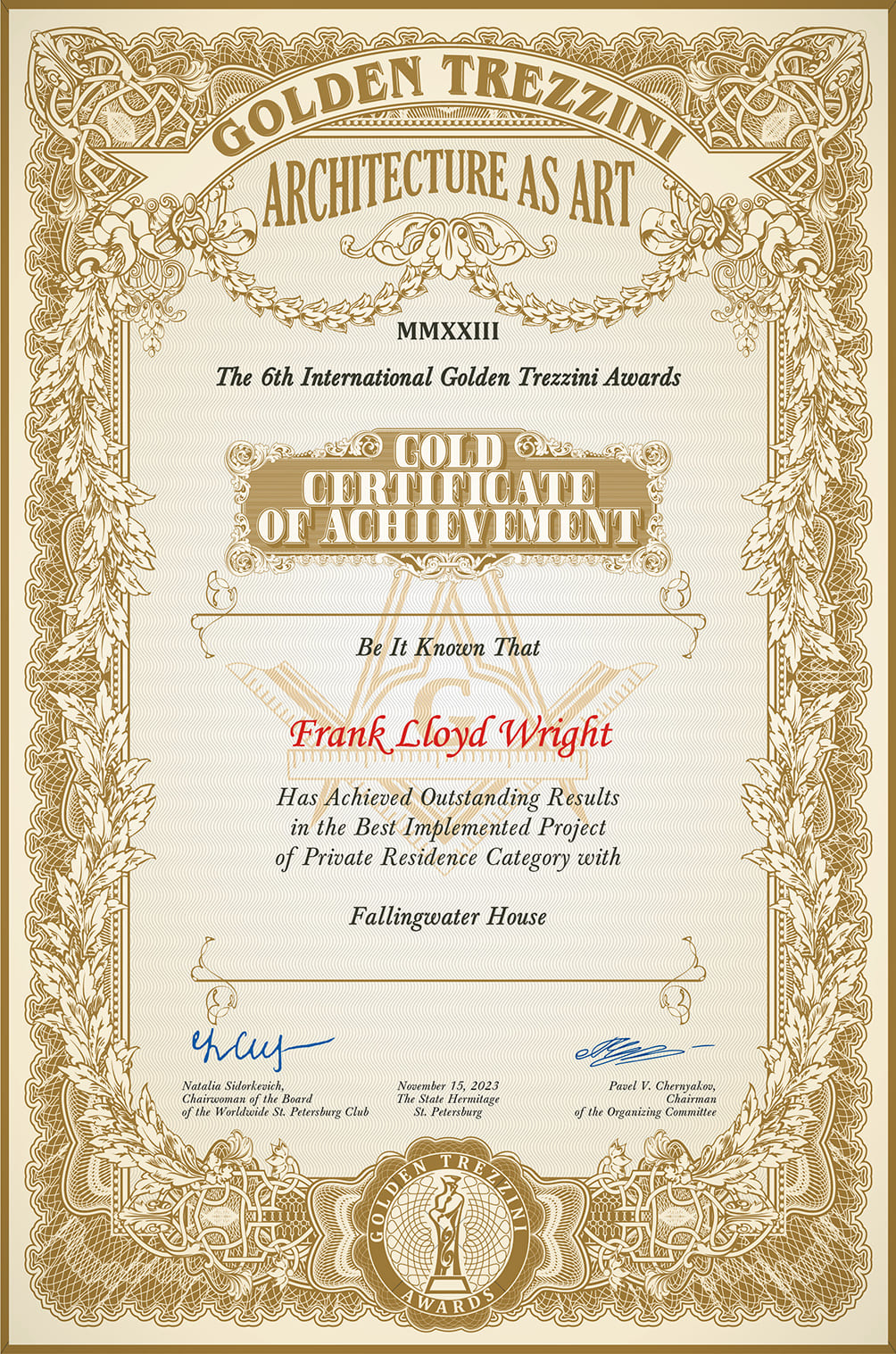 The applicants (but for the winners and finalists) highlighted by members of the International Council get Gold Certificates of Achievement.

Gold Certificates of Achievement are also awarded to applicants of every major category that get the best Premio del Pubblico voting results regardless of the category (but for the winner of the Premio del Pubblico prize, who gets the absolute majority of votes — this person gets a Domenico Trezzini gilded statuette and a Winner Certificate).

Winners of the Gold Certificates of Achievement that cannot take part in the Awarding Ceremony, will be sent their certificates on request by e-mail (pdf-filed ready for print). 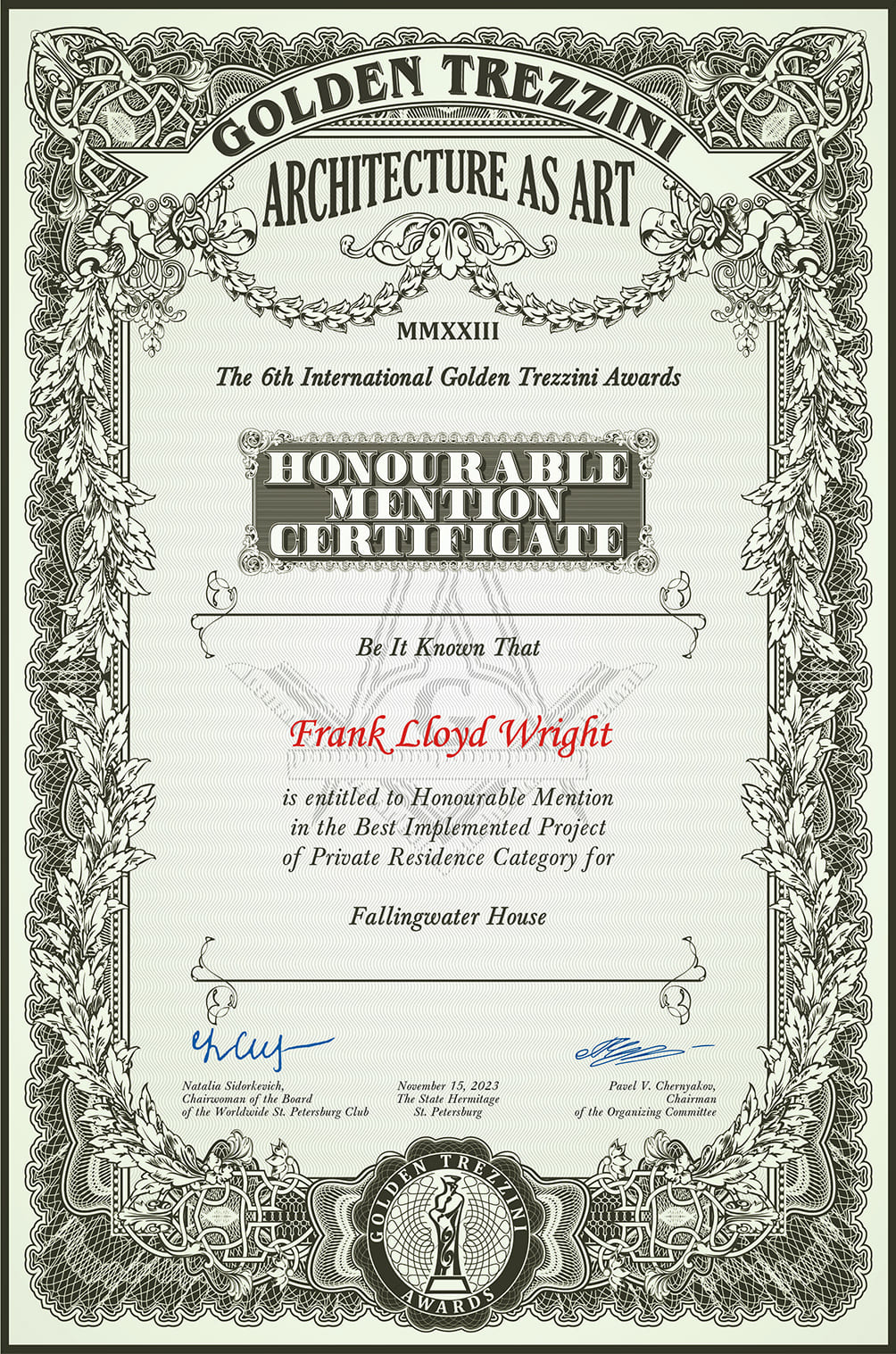 The applicants (but for the winners and finalists) which get 7+ points (from 10 possible points) during the voting by the Qualification Committee get Honourable Mention Certificates.

These are sent on request electronically (pdf-filed ready for print) after the Awarding Ceremony. 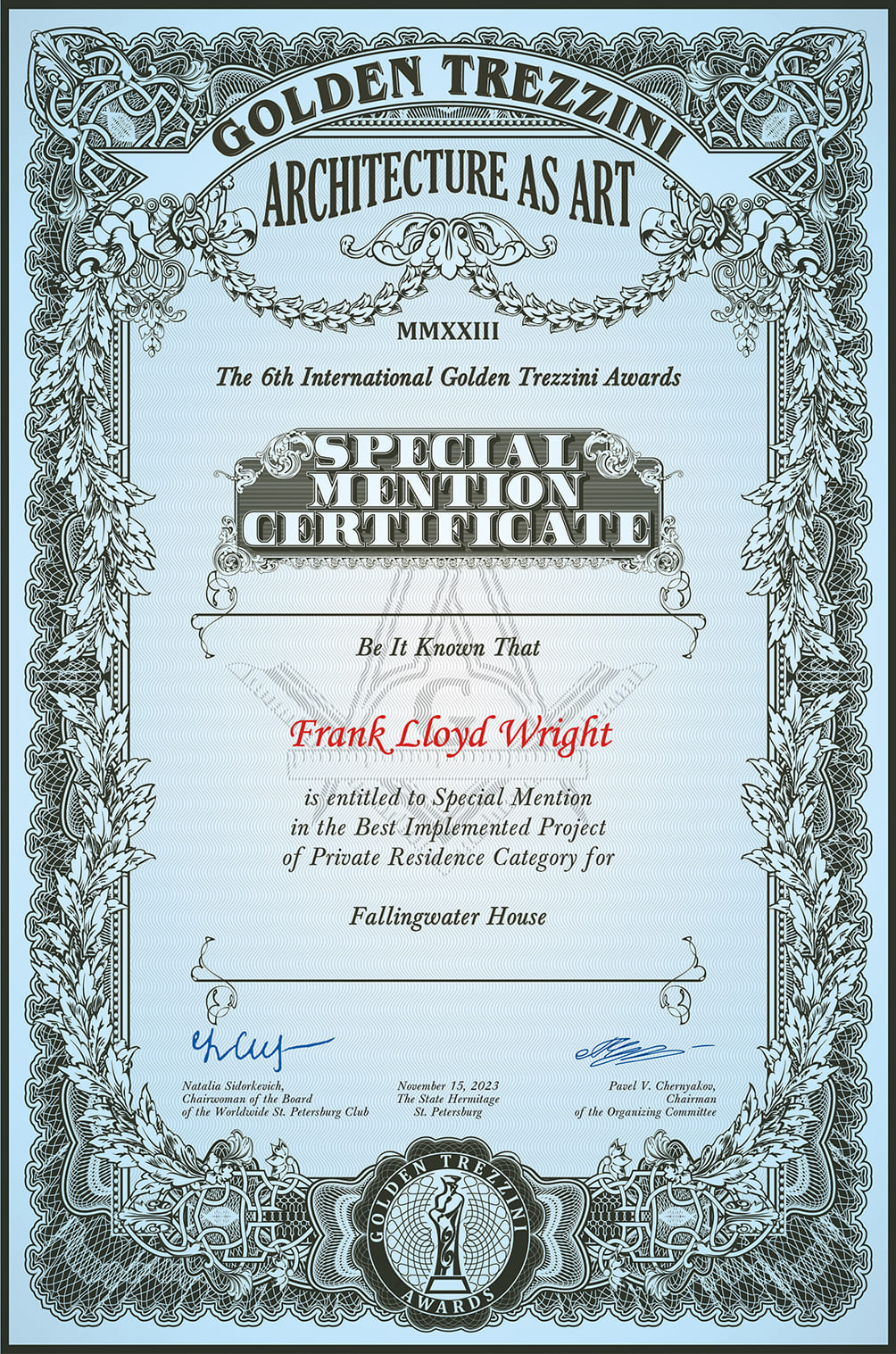 The applicants (but for the winners and finalists) which get 5 to 6.9 points (from 10 possible points) during the voting by the Qualification Committee get Special Mention Certificates. 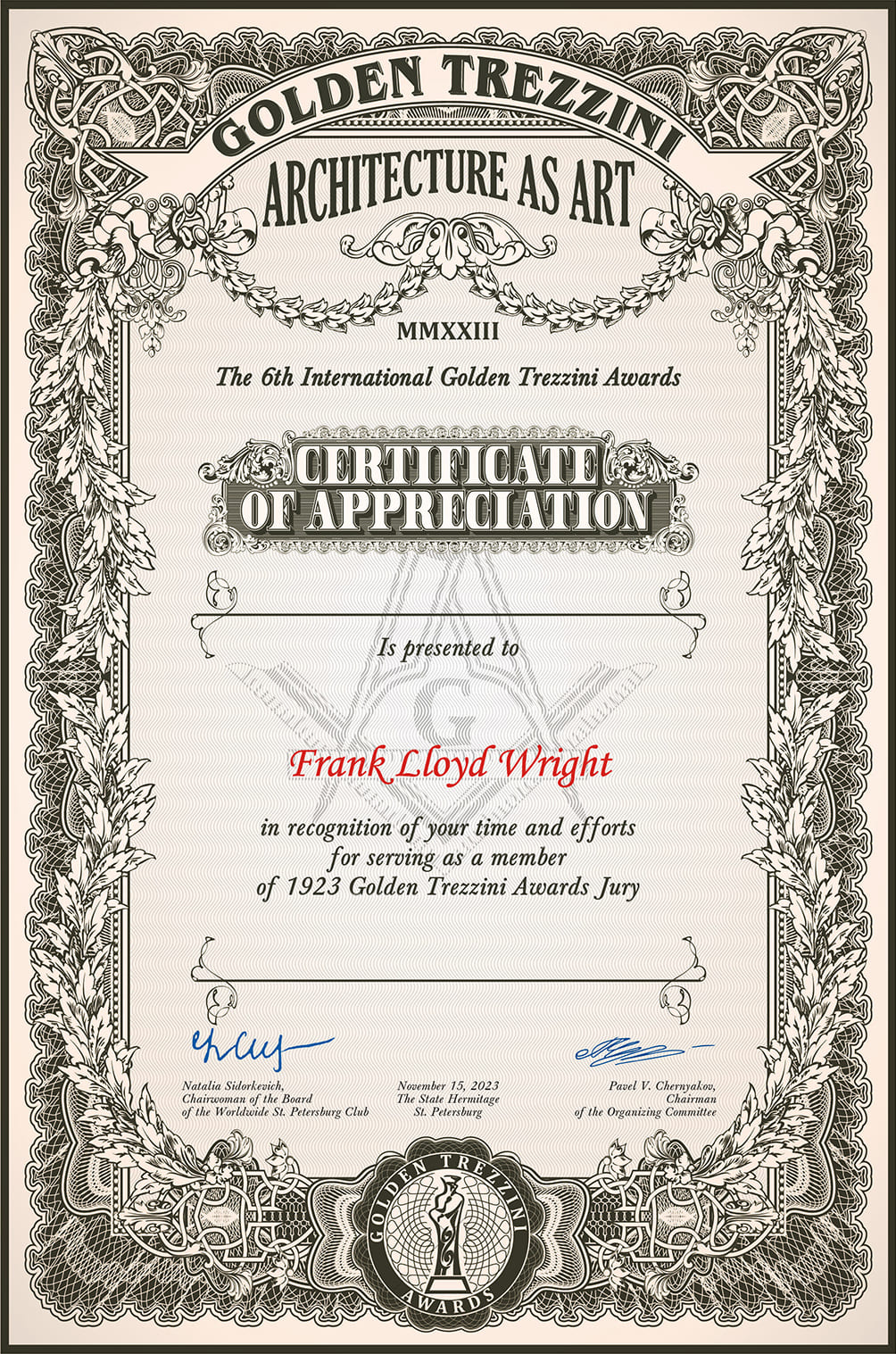 The members of the International Council, the Jury, and the Qualification Committee, as well as the partners to the Awards who offered substantial support with arranging and holding the event are awarded with Certificates of Appreciation.

Winners of the Certificates of Appreciation that cannot take part in the Awarding Ceremony, will be sent their certificates on request by e-mail (pdf-filed ready for print).

Moreover, specially for the holders of Nominee, Finalist, Winner, Gold Certificate of Achievement, Honourable Mention, and Special Mention badges were issued. These are png images with transparent background that the holders of the relevant certificates can use in their visuals — at websites, on social media, in portfolios, and promotion campaigns. Please follow the link to download the badges, the logo of the Awards, and the picture of our figurines:

The Organizing Committee grants all the contestants to use these images free of charge.